This recipe has me super excited! Dumplings are probably one of the most famous Chinese dishes. For me they really are a staple. My mom always made them filled with meat, which is absolutely delicious. But since I now eat plant-based 90% of the time, I wanted to veganize these dumplings.

Don’t be scared of by the folding of the dumplings

Now when it comes to dumplings, what scares many people off is the shaping and folding. Let me tell you the good news: The shape doesn’t matter. My dumplings also don’t look great. And you know what, you can keep it real simple: You can simple fold your dumpling skin in half to close and that’s it. There is no right or wrong technique. I’ve even come to notice that each family coming from different regions have different dumpling shapes. You can really get creative!

it’s vegan and full of flavor! You won’t want meat.

Now let’s talk about the taste. I was at first scared that because there is no meat in these dumplings, the umami taste and the flavors would be missing. That a vegan dumpling would taste super bland. But let me tell you, this one does not! I tested different versions of the recipe, and this is the perfect combination. We for one get the flavors from the shiitake mushrooms and we fry the ingredients of the filling as well to further get out most of the fragrance. I’m so happy with the outcome of this recipe and don’t think for one second that is is inferior to it’s meat counterpart.

What I recommend is to make these in bulk. Maybe on a sunday or so, when you have lot’s of time. Or what many Chinese families to is to make these dumplings as a family. This way you have lots of people helping to shape and make the dumplings and things move along much quicker. Now I recommend making a lot at once, so you can freeze the extras. To freeze them place the dumplings on a parchment lined tray and put that into the freezer, Once they’re frozen you can transfer them into a bag to save space. To me frozen dumplings is like an Asian version of frozen pizza: perfect for those lazy day where you don’t want to cook and want something warm and comforting. Just throw them in a pot of boiling water and they are done in 5min.

Turning them into pot-stickers

Or you can turn them into pot stickers. The art of making the perfect pot stickers is the golden crust on the bottom. For that simply add 1-2 tsp of flour to your water before adding to into the pan. And at the end when you want to get out the dumplings, Get a large plate and place it face down over the pan and flip the pan with the plate. So that the pan is faced down and the plate up. This is how you present the delicious golden crust.

Enough with the chatter, let’s get started. 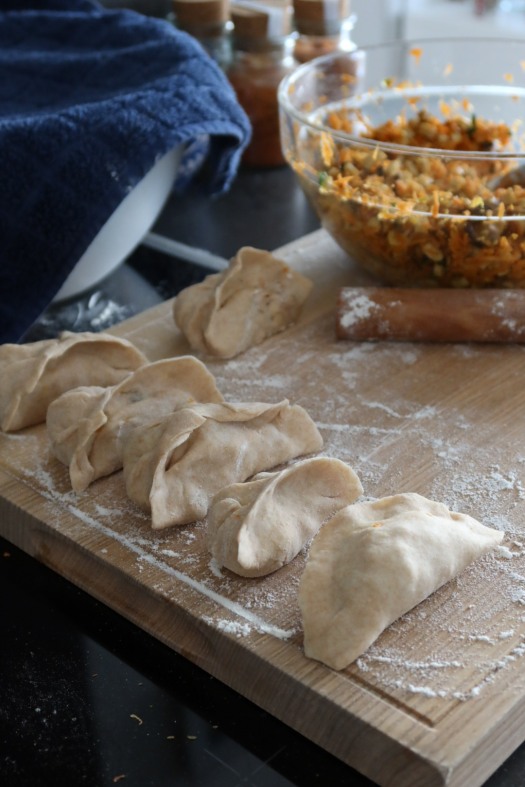 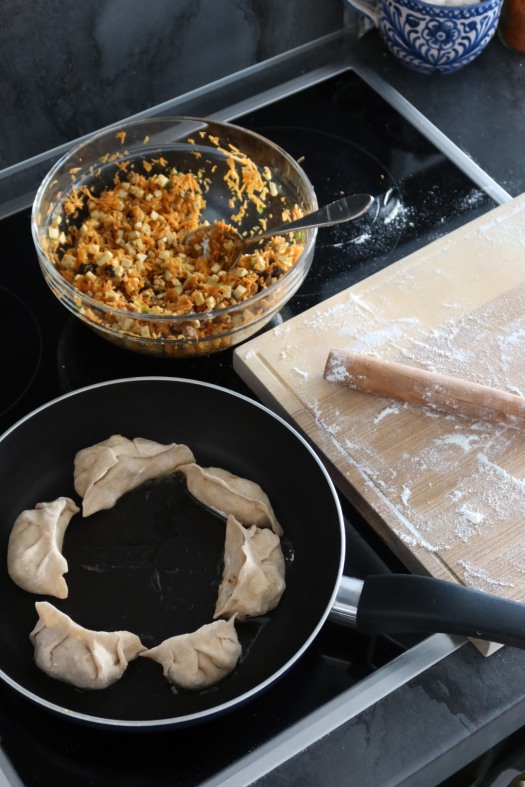 That’s it for this dumpling recipe. I hope you love it! I’m still obsessed with this recipe, that I will be making this quite a lot in the next few days.

Hi Friends,
Welcome to my page! I have a huge passion for food, and a large amout of time during my day is spent thinking about food. I feel so blessed to be able to share my kitchen creations with you and hope to inspire you to easy and delicious home cooking.
with love,
Silvia

Join a space where we come together to get inspired and broaden our horizons.

Click here or on the image and I’ll see you on the other side :)

If you have the urge to support me:

NEW VIDEO! plan my week of vegan meals with me😊 I made this delicious vegan coronation sandwich😍😍
My current lunch repeat: vegan lentil Shepards pie 😊😊😊 I froze a bunch for a quick meal💪
❄🥟❄🥟❄🥟
Celebrating my birthday last weekend:
Nowadays it's all about cooking once and then having 3 or more meals. Like this mustard pasta salad. Saves me so much time! And since my Parents have such a HUGE freezer, I'm freezing a lot of meals, so food is ready quickly when I don't really have much time or energy💪 how do you pre plan and meal prep when you are working a 9-5 I need some tips 😂
I never used to be the person who lived for the weekend. I loved all the days in the week! I always thought, how sad to live your life for the weekend. Well.. now that sad person is me 😅 ever since I started working 9-5 this is me each Friday 🤣
Loading Comments...
Comment
×
%d bloggers like this: